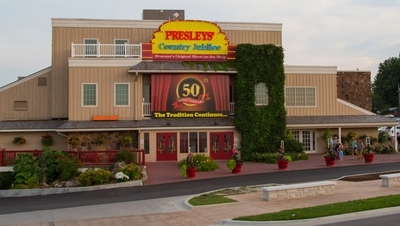 "Branson's Original Show On The Strip" Long before Hwy. 76 became America's lighted boulevard of family entertainment. Long before Branson became what 60 Minutes called "the live country music capital of the universe." Long before any of that - down in the depths of Missouri's caves - there were the Presleys. They were an Ozark’s family who played the underground stages of the Missouri hills. Folks from all over would pack the caves to hear their legendary family performances. So many, in fact, the caverns couldn’t hold’em anymore. So the Presleys left the caves and bought themselves a piece of land out on an isolated two-lane stretch of asphalt just outside of town. Wasn’t long after that when their show opened in a brand new theater. It was Branson’s original country music theater. The Presleys were a smash hit. People from across the country lined up every night for a chance to hear the country and gospel music the Presley family loved to perform. Pretty soon, other theaters started popping up around the Presleys. The years passed and Hwy. 76 became a glittering mecca of country music stars. And smack dab in the middle of it all, from the very start, were the Presleys.

Branson Ticket Store is an Authorized Reseller for shows at Presley's Theater. Once reservations are made, your tickets will be available for pickup at Presley's Theater. Identification will be required for the person whose name is on the reservation. It is recommended that your arrive at least 30 to 45 minutes before show time to pick up your tickets.